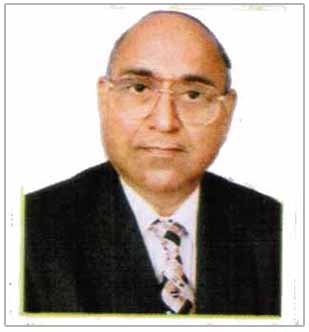 Form The Pen of The Founder

I have been in the field of education now for more than 50 years and I feel highly elated at times to see the good fruits on the trees. I planted in the past after great labour and struggle. This is true in regard to autonomy for Ewing Christian College as well as development of Ewing Christian School.

The idea for starting an English-medium school in the campus of vacant Rhea hostel building was implanted in my mind by my wife way back in 1991, and I grabbed it at once as a good alternative use of the building over other alternatives, as I felt both of us could contribute our best through our experience and expertise in developing a school. The Board of Directors of the College at that time had no funds to spare on a project like this.

In the month of July 1992 door to door publicity by distribution of hand bills was done. Advertisements were inserted in the newspapers and announced in the churches, and initial admissions were done at the Bishop Johnson School in the month of July and mid August.

I approached Mrs. Clara Browne who had retired and was living nearby to take up the responsibility of running the School which she gladly accepted at a very meager salary which we could afford at that time. Two lady teachers and three karamcharis were appointed and thus the school stated at the present site with 41 children on 21 August 1992. The initial monetary grant toward renovation of the old and worn out building along with the salaries of the employees came from Bishop Johnson School and continued for several years in the form of loan (which is being honestly refunded now).

The School thus started, expanded year after year in classes and number of students . When Mrs. Browne retired in june 1996 Mrs. Shireen Chand who herself is a trained teacher and counselor left the IPEM and joined the school as the Headmistress at a lower salary. The School has kept on growing since then by leaps and bounds attracting students from the surrounding areas in large numbers and pressurizing for admission .

Though seventeen years have gone by since after establishment of the school, in my mind it is still a teenager and has to grow more perhaps not in number as we have reached a saturation point but in betterment of physical facilities and excellence.

I had a dream of creating a college complex as envisaged by the U.G.C. Which I spelled out to the Board of Directors of Ewing Christian College in my last report as the Principal of the college before my retirement and , I am very happy now that I have been able to put my dream into action. I was one of the happiest persons when the school in 2003 initially received affiliation from the C.B.S.E. for starting Class IX and later in 2005 for Class XI when the status of the school was elevated to the senior secondary level. The School has been certified as a Christian Minority institution by the National Commission for Minority Educational Institutions.

While looking back at the phenomenal growth of this School I cannot ignore to appreciate the supportive role played by many other persons. Bishop A.R. Yusuf , being my class fellow at the Ewing Christian College gladly accepted my proposal and put his complete trust in me. Bishop A.R. Stephen being an educationist himself whole heartedly supported the School and co-operated in every matter. The Committees of Management formed at different stages of the growth of the school always supported and encouraged our efforts. The leadership provided by the Principal and dedication and hard work of the staff indirectly gave publicity to the school. However, the school would not have been able to develop initially had not Mr. N.L. Singh generously supported it financially for several years.

Once the school became financially viable there was no going back. The fly wheel of progress continued to move faster and faster till we have reached a stage this year when it is considered a premier educational institution in the south city of Allahabad.

Do we see the hand of God in all this ? Yes I do . We have been only a means for carrying out the work of Him who chose us and given us different responsibilities. All honour and glory therefore, should go to Him specially for choosing His humble servants like us for the fulfillment of His plans.